After her, sons of high officials are all chasing;
On silk handkerchief the abducted bride`s tears a-falling.
Once inside the mansion, into the deep forever --
Only a total stranger, now her former Lover.

"APPs" Self-Defence (4): In Martial Arts there is "No Fastest, only "Faster!"

There is no one "Fastest Fighter" in the martial arts world, strictly speaking. For "fast" is a relative and elusive term. The yardstick used to measure it varies by itself, too.

There is a popular Chinese saying:

"For the mighty fighter there's always someone mightier;
For the high mountain there's still another higher."

You may be the "fastest fighter" among your peers and in your region. But your Attacker could still be "faster" than you! Moreover, no one can be fast at all if he (or she) is sick, unwell, nursing an injury, emotionally disturbed, or just not at the peak of his (or her) performance level mentally, physically and spiritually.

Similarly, it may be argued that "there is no one-single martial art form (or move)" that can be said to be the "ultimate winning form" that can beat all other styles at all times.

In any case, being the "fastest fighter" per se does not necessarily mean you will be the winner in a mortal combat if, for instance, your hits are mostly off-target! There are also other important factors at play.

Time is of the Essence in Any Fight
In a life-or-death fight, you as the Defender should concentrate on using only direct hits, kneeing or kicking in counter-attack. Use those powerful strikes that travel the shortest distance and use up the least energy, thus saving yourself precious time and power for your final escape to safety.

Time is of the essence in any fight. Your aim here is simply to disable the Attacker as soon as possible, to make good your escape. Accordingly, all slower techniques, like round-house kicks or punches should not be used. In fact, if your Attacker ever turns his back to you and starts raising one of his feet up, in preparation for the round-house, his groin is wide open -- quickly, kick him in his groin from behind! It doesn't matter if you are using the in-step of your foot or even your shin (depending on the distance between you and your Assailant). His balls will be crushed in either case.

Use Only Direct Hits and Kicks
So, any holding, grappling, choking or controlling techniques are irrelevant; these would likely make your situation more dangerous. The relatively-slower throwing techniques in judo, jujitsu and aikido etc. should not be used either in defence since, as a hard-core fighter, your enraged Attacker would certainly know how to break fall and just roll up onto his/her feet again to continue the assault, probably with added vengeance.

Bolt celebrating at the 2013 London Anniversary Games. (Photo from Wikipedia)
Usain Bolt, the current "flying man" of the world and nine-time Olympic gold medalist , has shown that time and again that he can run 100 metres (328.20 feet) in under 10.00 seconds. His fastest record is 9.58 seconds. On average, he would have covered well over 30 feet in just 1.00 second!

Covering 10-15 Feet in 1.00 Second
One may wonder how far can an average person cover in a second.
On September 19 this year, a terrorist stabbed several shoppers at a St. Clouds mall in Minnesota, U.S.A. Fortunately, an off-duty police officer was at the scene. According to CNN reports, the officer drew his side-arm and warned the Attacker to stop and raise his hands. The officer said the Attacker just lunged forward and covered over 21 feet in less than 2 seconds. He shot the Attacker who fell onto the floor, but he got up again and the policeman shot him again, until he was dead. Another eyewitness said he saw "a blank in the eyes of the Attacker." 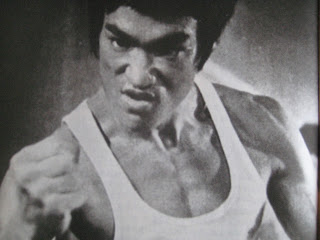 Did Bruce Lee Knock down his Challenger in 22 Seconds?
I remember reading some decades ago in a Black Belt Magazine article that an unnamed karate black-belt once sought out Bruce in his backyard and challenged him to a fight. The cocky guy insisted on changing into his karate uniform first and that there should be no eye-gouging or groin-attacks. The impatient Bruce Lee simply said "no rules or no fights"!

The incident was retold by one of the eye-witnesses who did the time-keeping. Less than half a minute into the fight, the Challenger was soundly knocked onto the ground. (I forgot what exactly Bruce did to him, whether he found an opening, or he made an opening for himself...) When the bewildered and defeated guy got up and asked how much time had elapsed, the Time-keeper said, "22 seconds." But, it was revealed in the magazine interview that Bruce actually took only "11 seconds" to floor the Challenger! The eyewitness confessed that he simply "did not have the heart" then to tell the utterly dejected guy the truth and so he just doubled the time involved.

Time -- a Strange Element
The modern concept of time-keeping in terms of hours and minutes are man-made. I believe time and space are relative and they are quite "plastic" to some extent.

When one meditates one would lose track of time. After a routine meditation session, one may think that 10 minutes have elapsed whilst the clock will tell you that in fact an hour or so has passed. As a meditation and martial art practitioner, I find that time tends to slow down if you are completely calm, relaxed and focused at the task in hand.

One morning some years ago, I was practising my elementary "Comet Hammer" moves in the park. It was just a 36" chain --intended for use as a dog leash -- that I bought from the local "dollar store". I attached a medium-size, somewhat weighty, brass number-lock to its end and hooked my right-hand index finger through the ring and wielded the "improvised home-made weapon" in circles, first clockwise, then anticlockwise, and made figure 8's vertically, horizontally and obliquely, in front of me and at my right and left hand side, etc. while advancing, retreating or side-stepping, extending or retracting my arm this way and that. I was thoroughly enjoying myself at the time. When I came to a stop I just threw the brass lock, without much thought, all the way up above my head, I raised my head slightly and stared at it. Quite strangely, time seemed to creep very slowly then and I waited and waited for the lock to drop back so I could catch it in my hand... then I made a mistake! I somehow allowed my focus to wander for a fraction of a second: I wondered why the weight was not dropping as fast as I anticipated. Suddenly, I heard a "pak!" sound and felt some thing was slowly dripping down my forehead. I touched that something with my left hand and realized it was my own blood. Because I wasn't concentrating I was hurt. Unfortunately, time did not appear to elapse uniformly for me during that exceedingly brief period! I was very grateful, however, I was not blinded in one eye in that incident.

Time Slows Down When You're Completely Relaxed
Vince Morris (-- if my memory serves me right), a karate black-belt and the co-author of "Karate Kata and Applications", wrote that once in an important tournament he was rather anxious in his fight. After he had made a major mistake and lost some points he was sure that he had lost the fight. Once this realization came into his mind, he suddenly became very relaxed and started to enjoy the remainder of the fight, more or less as a spectator than as one of the contestants.

To his amazement, the opponent then appeared to "move in slow motion" and so telegraphed his every move. Morris was thus able to intercept the opponent's strikes and kicks and made effective counter-attacks. He finally won the championship (or something like that). But this seemed to be a one-off incident. He did not say whether he could duplicate such a feat at will afterwards. (Well, most probably not, otherwise he will be one of the best fighters the modern world has known.)

Motion through Space Affects the Passage of Time


Albert Einstein told us that everyone experiences the passage of time individually. Time and space are actually fused together as one entity, the 4-dimensional structure called "space-time." It is a dynamic fabric with a flexible geometry that can be stretched, twisted, wrapped, rippled under the influence of gravity. Reality is far, far stranger than we all normally experience in our daily life. Now, only if someone in self-defence could slow down time at the moment of the Assailant starts attacking...

Homeworks
Do not give your Attacker the advantage of maximizing his in-coming momentum in a powerful direct-line frontal assault.
Practise side-stepping in a small semi-circle, to the left as well as the right hand side of the Attacker. Do this by crossing quickly one leg over, either in front or behind, the other stationary leg and turn with hands raised in front of you at chest level.

Similarly, also practise side-stepping continuously in a straight line, like a crab walking. When your back is against the wall and the Attacker is rushing in head on, you can evade his assaults by shifting swiftly sideways and pivot to his non-dominant-hand side (usually his left flank) and counter-attack!

Now, turn your upper body to one side with one leg (and toes) facing forward and bring the other leg in a straight line behind the forward leg at slightly wider-than- shoulder width. Slowly bring the rear leg up to the heel of the forward leg; at the same time, kick your forward leg forward and start "galloping" sideways. In this posture, your broad chest is turned 180 degrees to one side and you can swiftly squeeze through narrow passageways.
(I do this occasionally on the long narrow aisle of a plane for a brief stealthy exercise during long flights when most of the passengers are asleep. The lights are dimmed and the silent cantor should not unduly alarm the odd passengers half-awake.)

The Gordian Knot is a legend of Phrygian Gordium associated with Alexander the Great. It is often used as a metaphor for an intractable problem (disentangling an "impossible" knot) solved easily by loophole or "thinking outside the box" ("cutting the Gordian knot"):

Turn him to any cause of policy,
The Gordian Knot of it he will unloose,
Familiar as his garter.

The river, alone I stand by;

Refreshening breeze by my ears glides.

How I envy the wavy fish flashing --

The time of their life they're having.

Alone in forest hill walk I;

A long stretch of sand and soil I stroll by.

The wind, the flow'rs and grass are

Calling my name are the birds wild. 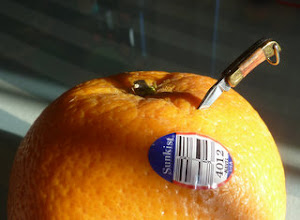